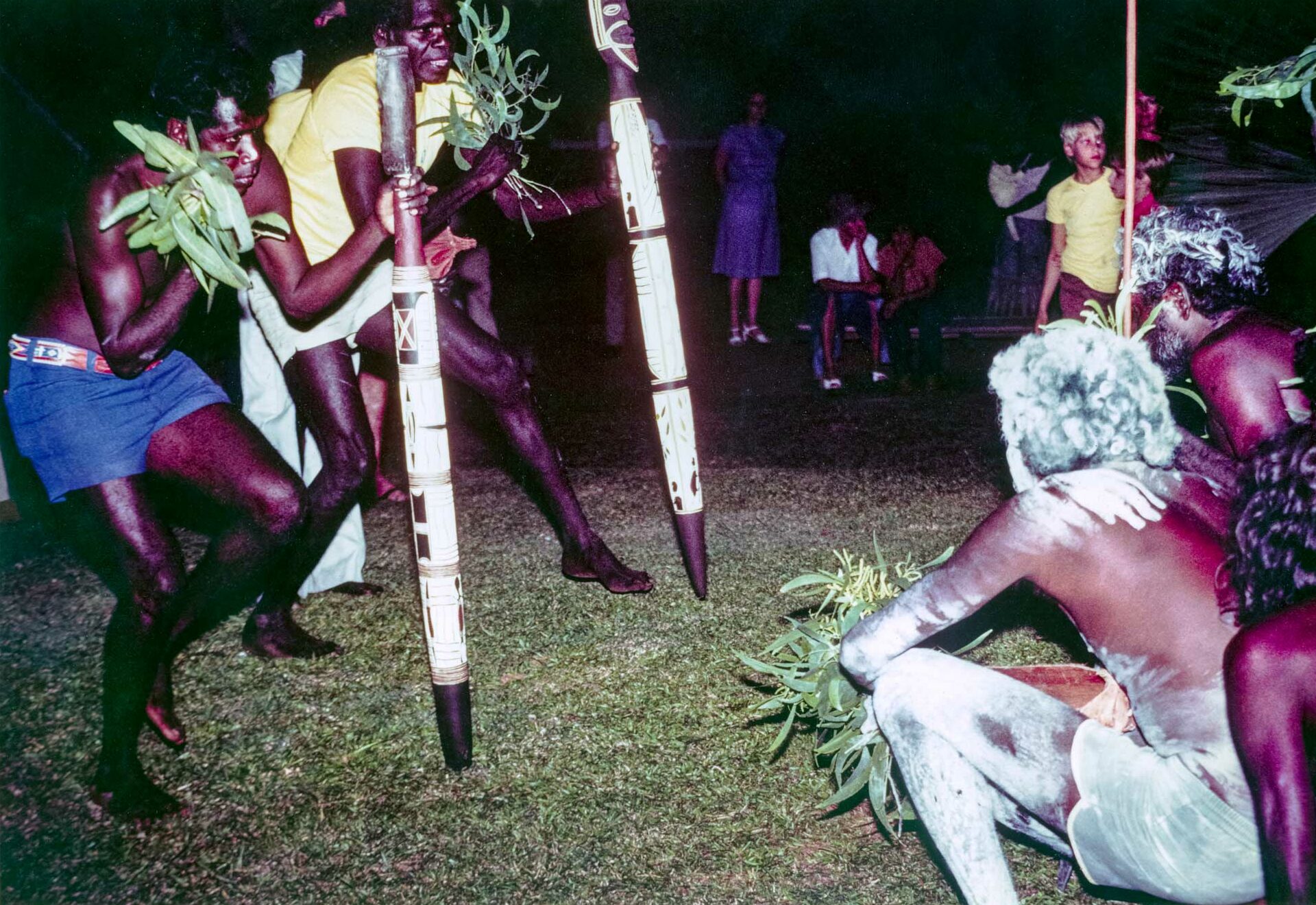 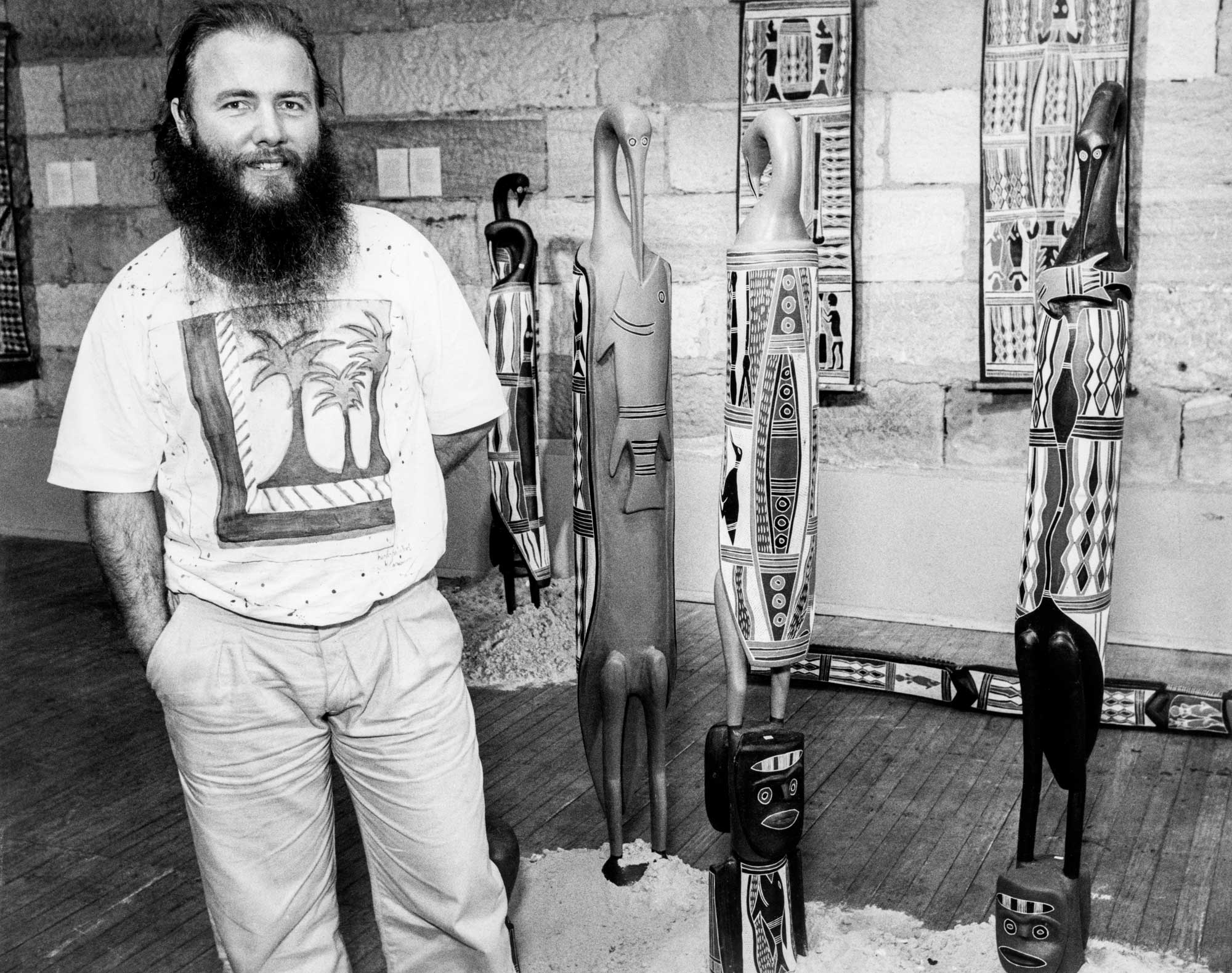 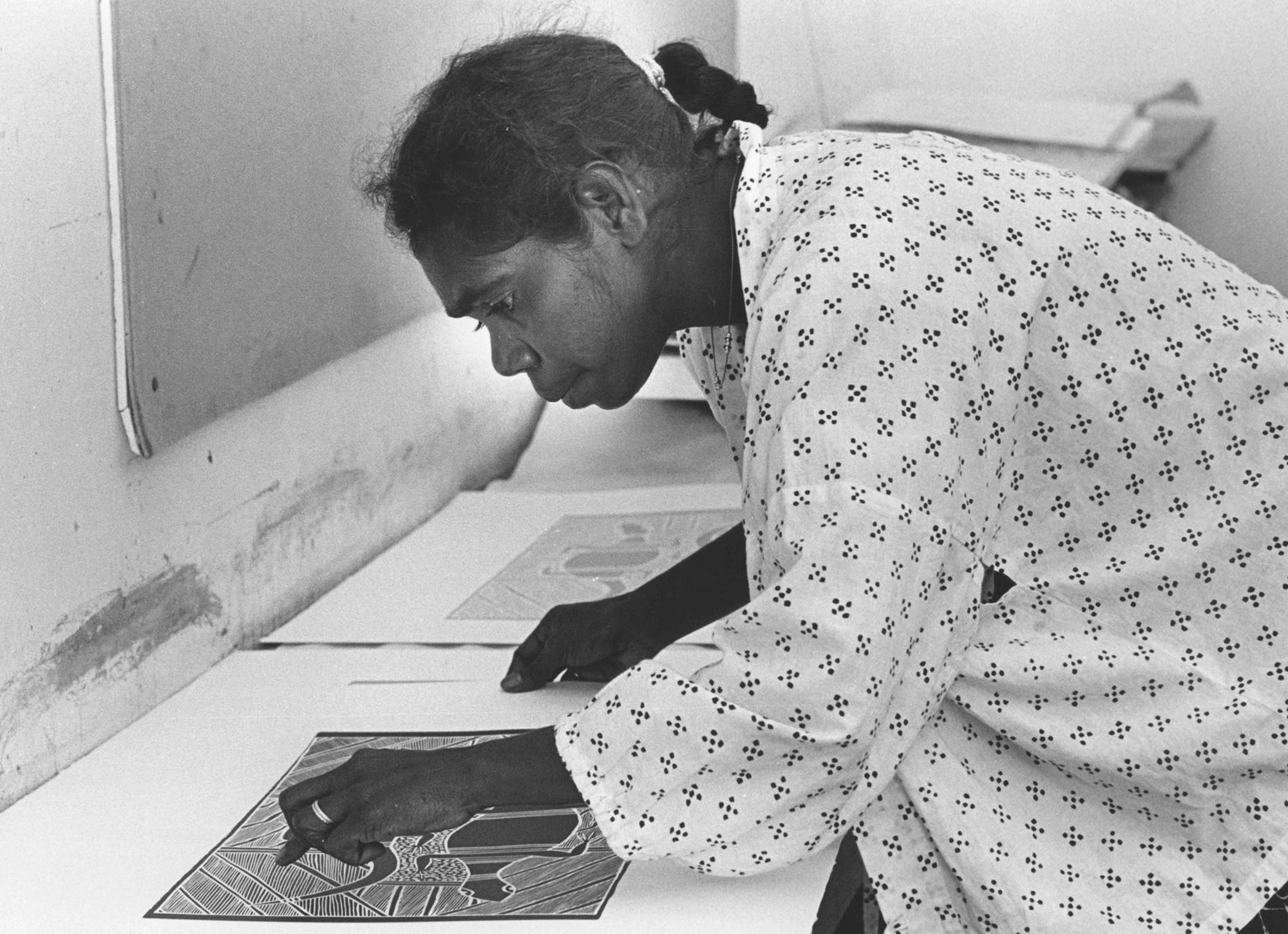 In 1983, the Yirrkala Arts and Crafts Centre changes its name to Buku-Larrŋgay Arts and Cultural Centre, reflecting its increasingly important role as a cultural hub in the community. As the decade progresses, artists experiment with new modes of printmaking, carving and bark painting and a powerful new generation of artists emerges from Yirrkala.

Yolŋu artists return to producing large barks to meet increased demand in the market for Indigenous fine art in the 1980s. Improved transportation makes it easier to harvest large sheets of bark and to ship the paintings safely.

Aboriginal Art: Malerei Plastik Handwerk aus Nord–Australien, organized by the Institut für Auslandsbeziehungen and sponsored by the Aboriginal Arts Board, opens in Germany.

Aboriginal and Oceanic Decorative Art, sponsored by the Aboriginal Arts Board, opens at the National Gallery of Victoria, Melbourne, before touring Victorian country centers.

Maŋgalili Bark Paintings from Northeast Arnhem Land, an exhibition of work by Narritjin Maymuru, opens at the courthouse in Nhulunbuy, Northern Territory. The dancers and ceremonial elements are organized by Yikaki Maymuru.

Aboriginal Australia, sponsored by the Aboriginal Arts Board, travels to the National Gallery of Victoria, Art Gallery of Western Australia, the Australian Museum and the Queensland Art Gallery between 1981 and 1982 before touring the United States, Japan and Europe. It is the largest exhibition of Aboriginal art mounted to date.

After moving to Darwin, Banduk Marika makes her first prints. She and Dhuwarrwarr Marika are among the first Yolŋu women to experiment with printmaking.

Aboriginal Art at the Top: A Regional Exhibition opens at the Museum and Art Gallery of the Northern Territory, Darwin.

Gawirriṉ Gumana suggests Buku-Larrŋgay Arts and Cultural Centre as a new name for the Yirrkala Art and Craft Centre. Buku- Larrŋgay translates as “the feeling on your face as it is struck by the first rays of the sun,” or facing east, which is a reference to the clans of the Miwatj region east of Milingimbi.

An exhibition opens at the Aboriginal Arts and Craft Company, Adelaide. Luma Luma No. II Yunupiŋu and his wife attend the exhibition opening. They then travel to Amata, South Australia, with Steve Fox, marking the first visit by a Yolŋu person to the desert.

Banduk Marika is invited to work as an artist-in-residence at the Canberra School of Art.

The Yolŋu establish the Laynhapuy Homelands Association Inc. (Laynha), which serves as a resource center for 27 homeland settlements across the region.

Banduk Marika and Jennifer Isaacs form the company Miyalko (derived from miyalk, the Yolŋu word for women), which assists remote Aboriginal artists by exhibiting their work in Sydney.

Galarrwuy Yunupiŋu is appointed a Member of the Order of Australia (AM).

Banduk Marika is invited to work as an artist-in-residence at Flinders University of South Australia, Bedford Park.

Baluka Maymuru wins the Memorial Award for Mawalan’s Eldest Son for Milky Way (Milnguya) and Crocodile at the 4th National Aboriginal and Torres Strait Islander Art Awards at the Museum and Art Gallery of the Northern Territory, Darwin. He is the first artist from Buku-Larrŋgay to win one of the awards.

The Art of the First Australians opens at Kobe City Museum, Japan.

Ancestors and Spirits: Aboriginal Painting from Arnhem Land in the 1950s and 1960s opens at the Australian National Gallery, Canberra.

While mainstream Australian society celebrates the bicentenary of British colonization, more than 40,000 Aboriginal people and non-Indigenous supporters protest for Indigenous rights in what is the largest march held in Sydney to date.

At the Barunga Sport and Cultural Festival, Arrernte and Warlpiri men from central Australia and Yolŋu men from northern Australia create the Barunga Statement. Sacred designs from bothregions surround a statement translated into English that requests recognition of the rights of Indigenous landowners by the Australian government. As chair of the Northern Land Council, Galarrwuy Yunupiŋu is instrumental. The statement is presented to Prime Minister Bob Hawke.

A museum is established at Buku-Larrŋgay with bicentenary funds. Naminapu Maymuru-White plays a key role in addition to training and working as a curator (1988– 96). It includes a gallery designed to house the Yirrkala Church Panels.

Banduk Marika becomes manager of Buku-Larrŋgay after returning to Yirrkala (1988–90).

Banunydji Yunupiŋu and her family start Galupa Screenprints. Though they live at the homeland center at Galupa, the busi- ness is based at the much larger Gunyaŋara Homeland Centre.

The Aboriginal Memorial, consisting of 200 hollow-log coffins by artists from central Arnhem Land, is exhibited at the Sydney Biennale.

The Inspired Dream: Life as Art in Aboriginal Australia, organized in collaboration with the Museum and Art Gallery of the Northern Territory, opens at the same time as the World Expo in Brisbane.

Dreamings: The Art of Aboriginal Australia opens at the Asia Society, New York, in partnership with the South Australian Museum, Adelaide, before traveling to the David and Alfred Smart Museum, University of Chicago; Los Angeles County Museum of Natural History; Museum of Victoria; and the South Australian Museum, between 1988 and 1990. After seeing Dreamings, the American businessman John W. Kluge starts collecting Aboriginal art in the hopes of forming an encyclopedic collection.

Pathways to Harmony, from Edward L. Ruhe’s collection, opens at the Spooner Museum of Anthropology, University of Kansas, Lawrence.