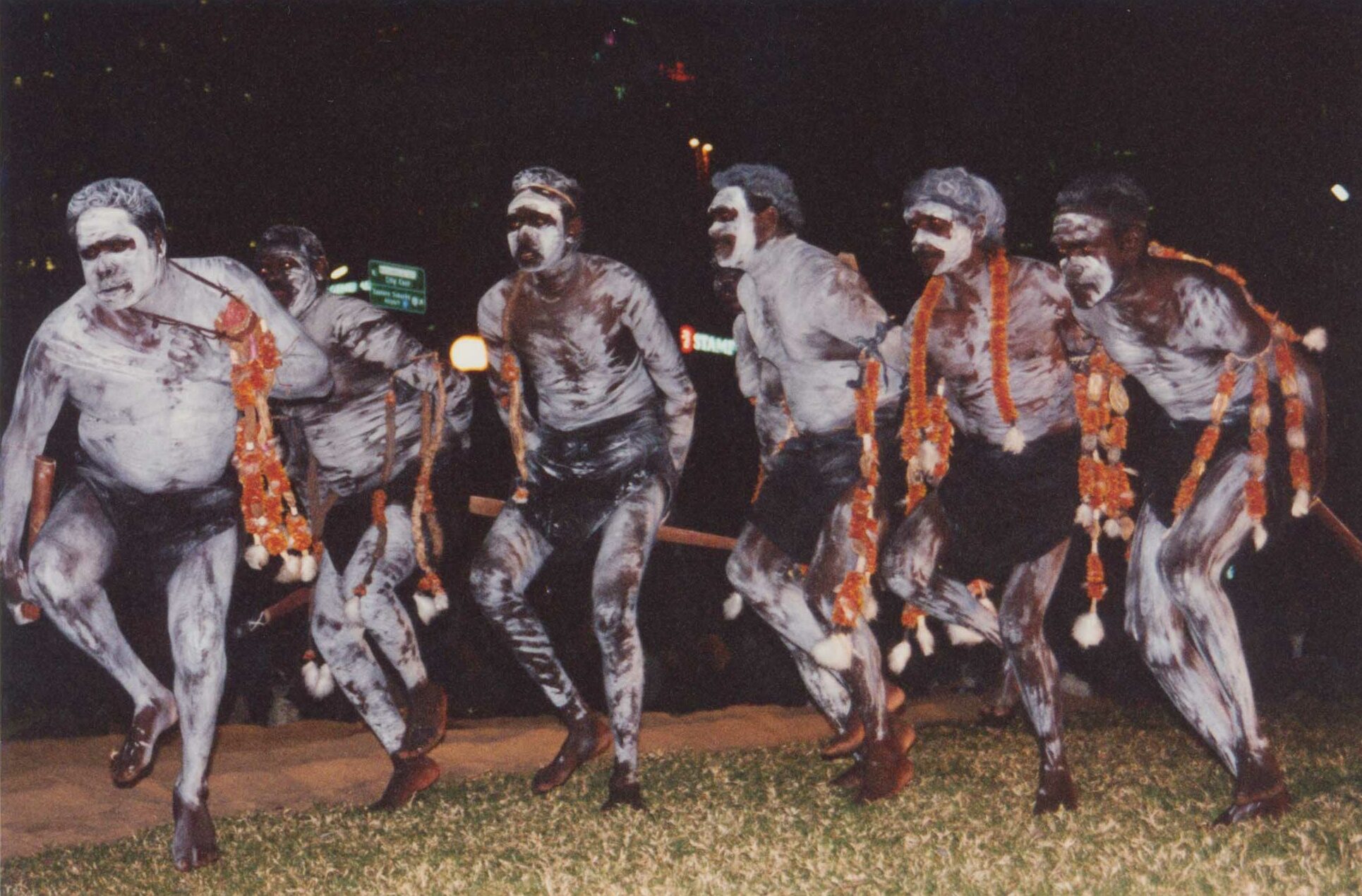 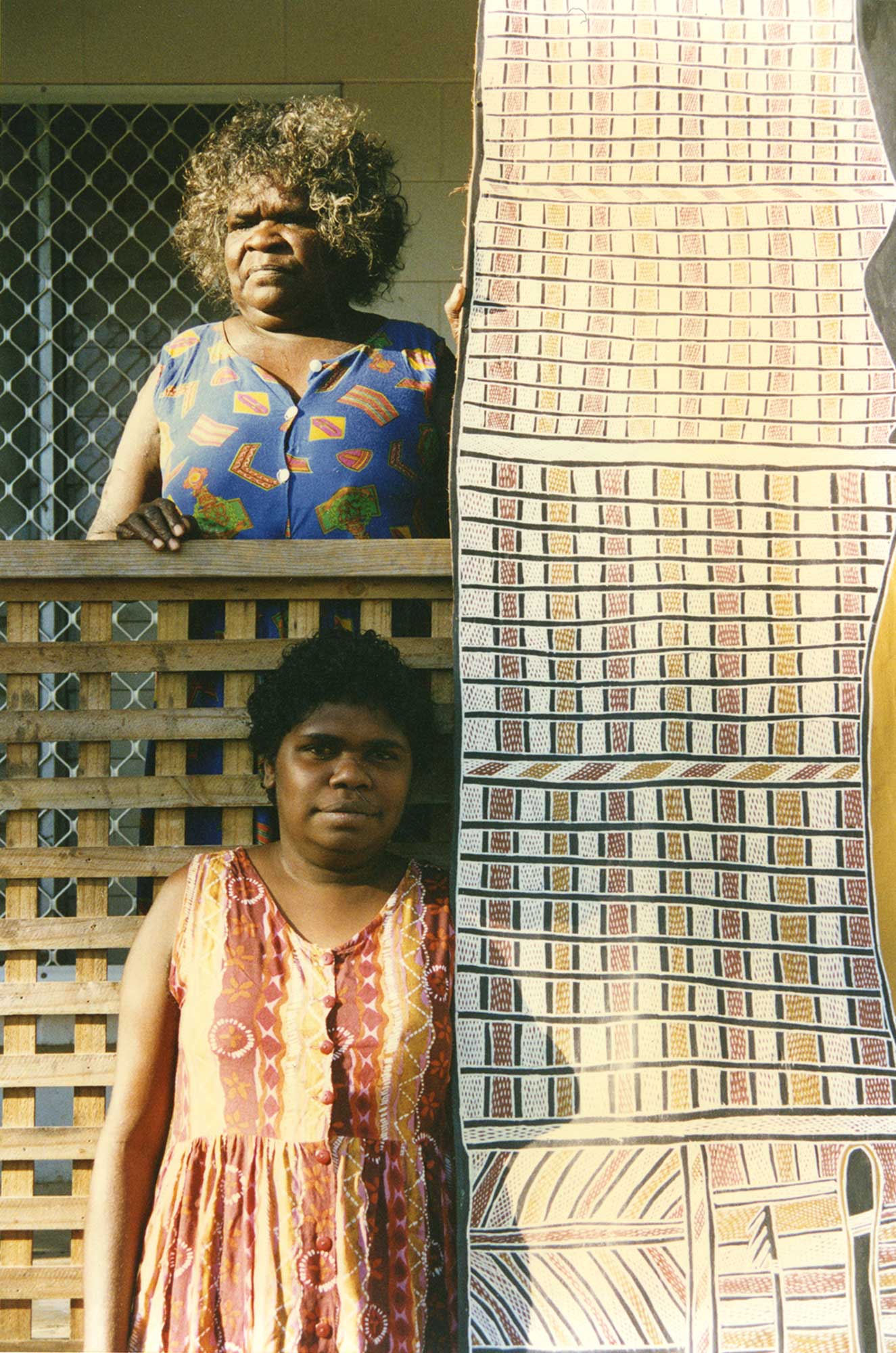 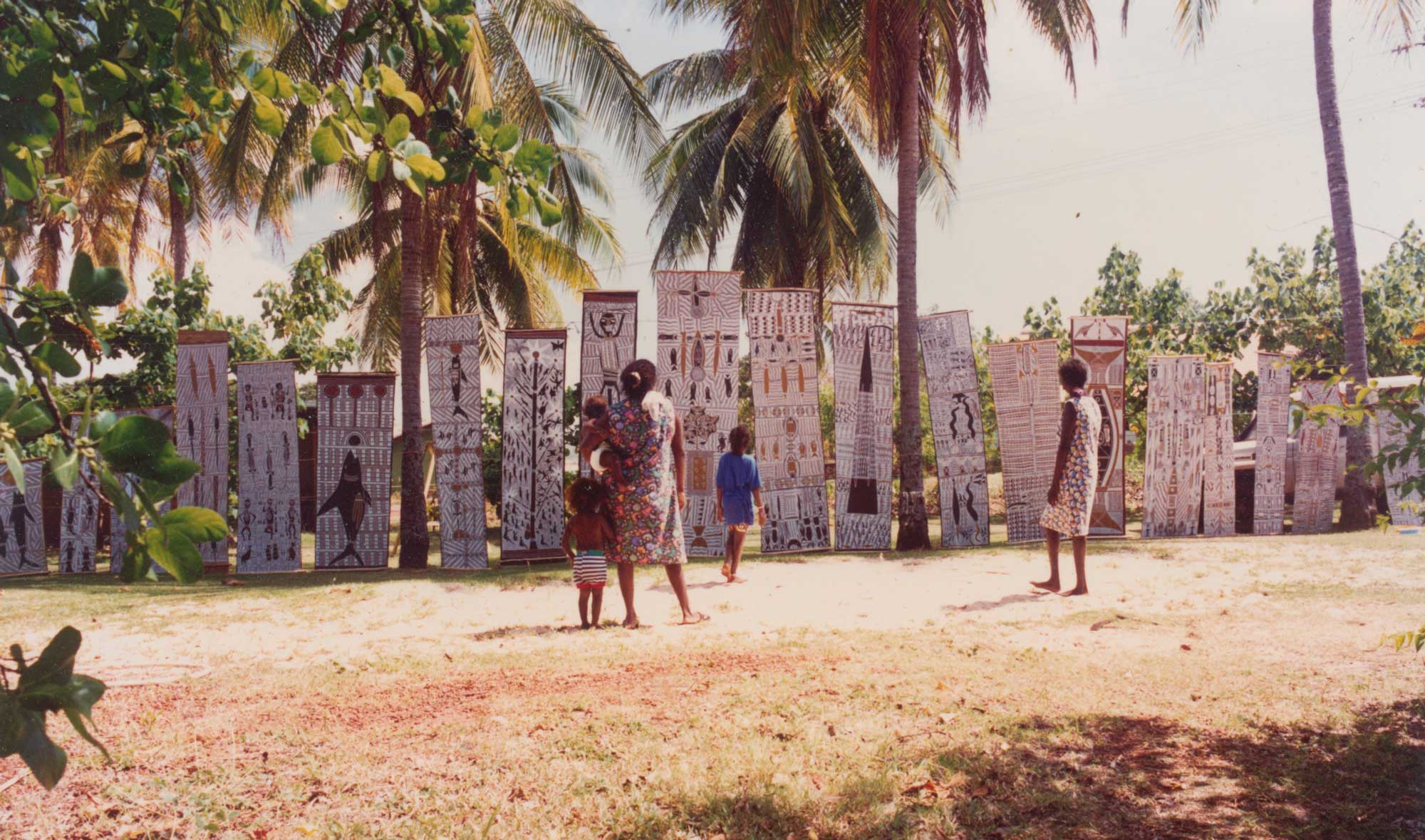 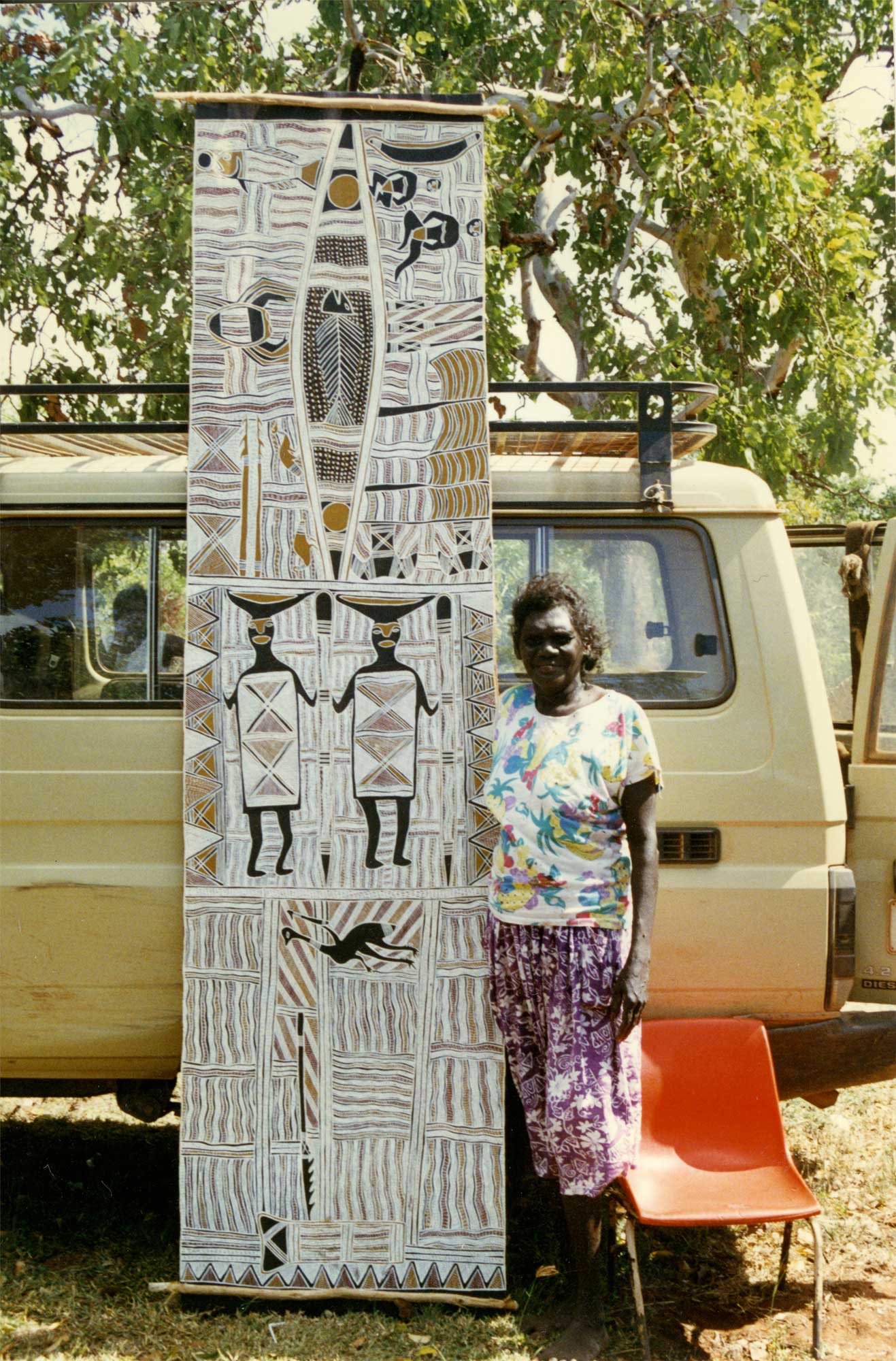 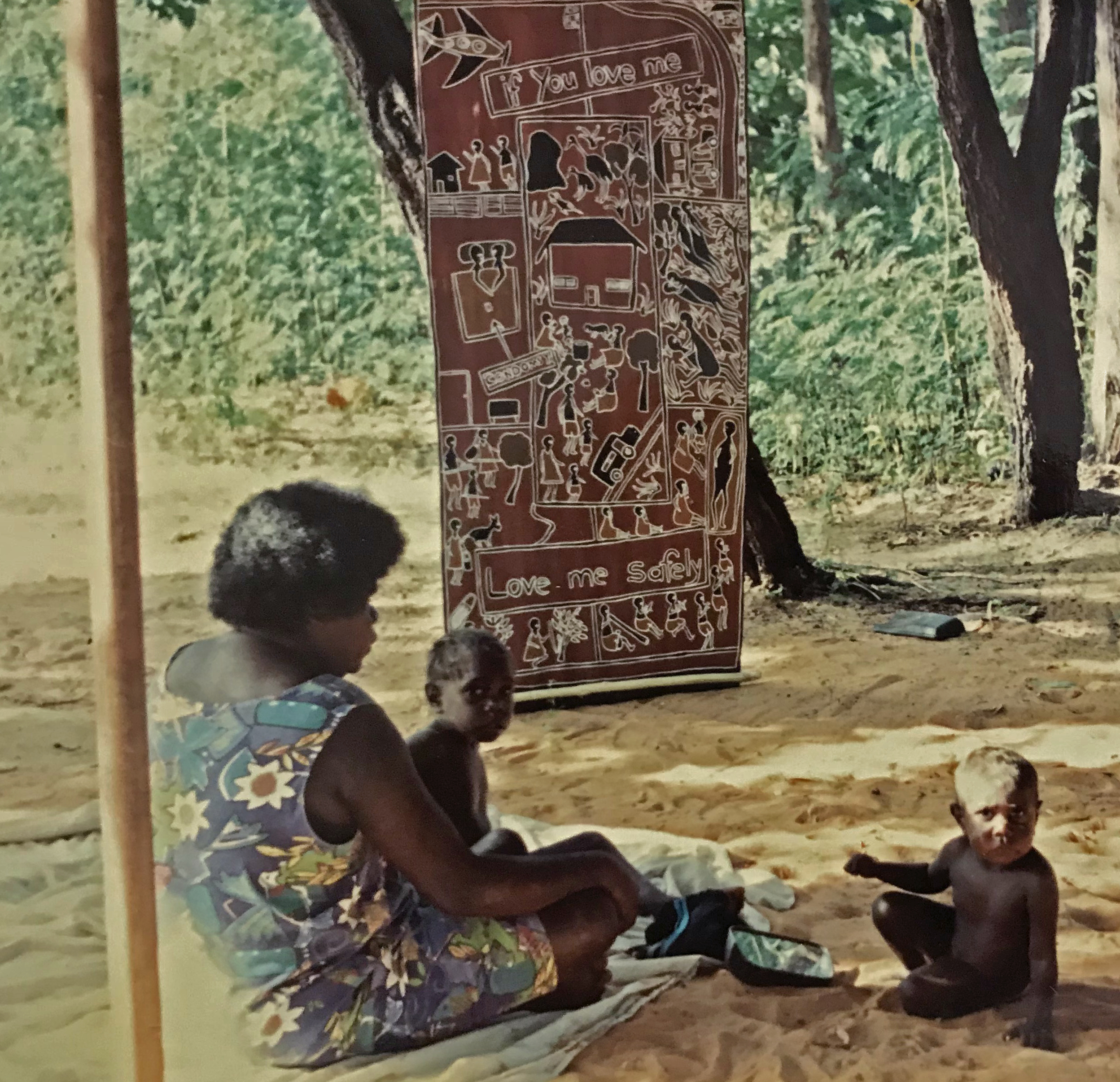 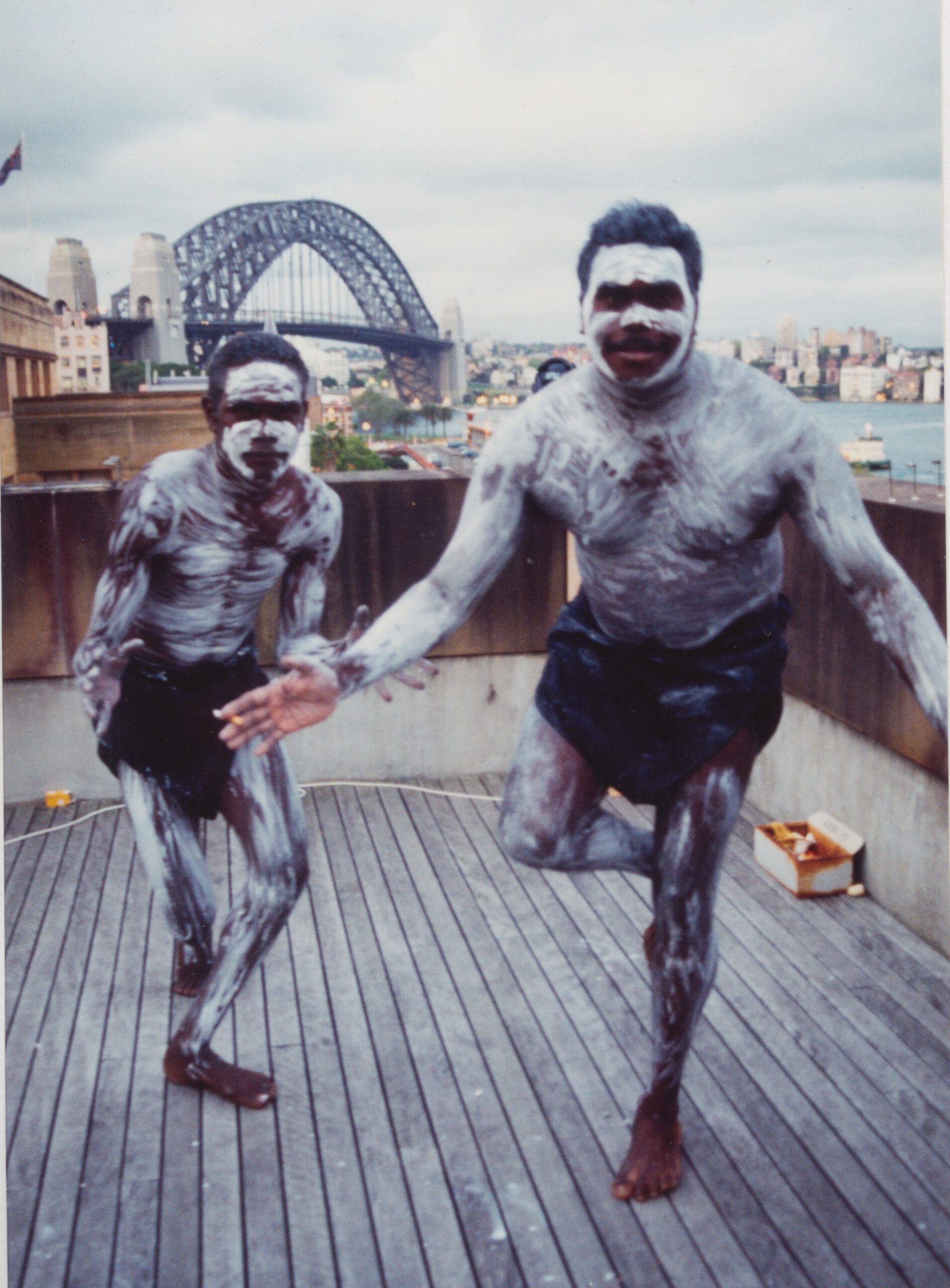 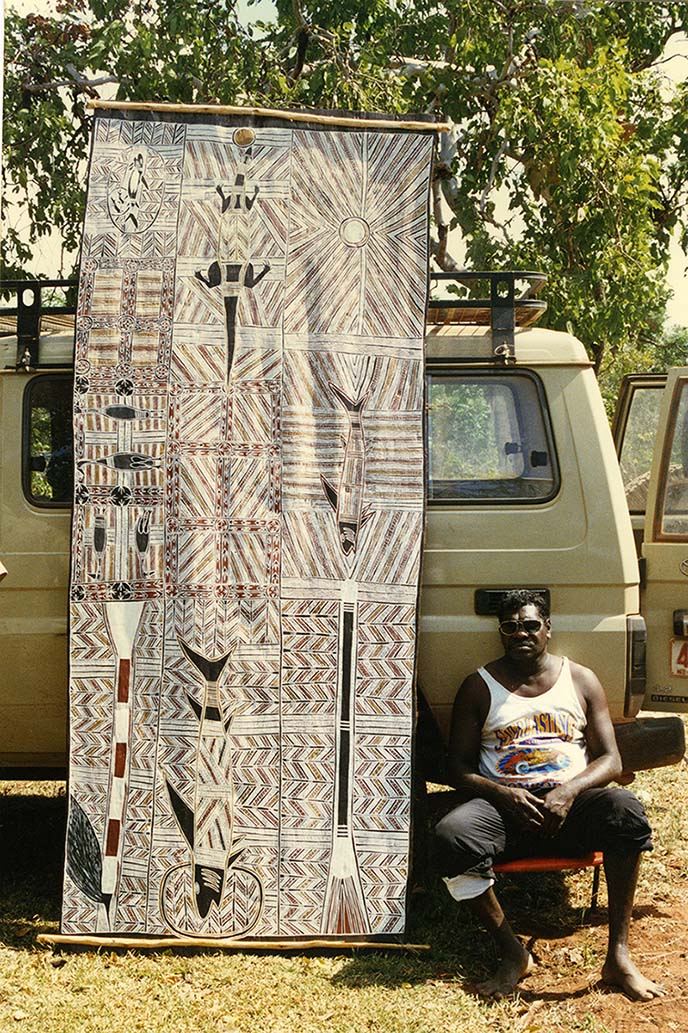 Buku-Larrŋgay Mulka Centre began the 1990s in a phase of rebuilding. By the end of the decade, the art centre was undergoing a renaissance. A dedicated print studio inspired different approaches to art making for a new generation of artists, while a series of major commissions resulted in some of the most monumental and extraordinary barks ever produced. Armed with these shimmering missives, the Yolŋu went back to the courts to win Sea Rights.

Buku-Larrŋgay gets its first computer, which further expedites communication with the rest of the world.

A new Aboriginal-owned art center, Nambara Arts & Crafts, opens in Nhulunbuy. Working with many of the same artists, it creates competition for Buku-Larrŋgay.

Dhuwarrwarr Marika is awarded a professional development grant by the Aboriginal Arts Unit of the Australia Council of the Arts to pursue her art full time.

Banduk Marika is the first Aboriginal Australian appointed as a member of the Council of the Australian National Gallery, Canberra.

Spirit in the Land: Bark Paintings from Arnhem Land opens at the National Gallery of Victoria, Melbourne.

In Mabo v. Queensland, the High Court of Australia recognizes Indigenous ownership of Mer (Murray Island) in a case brought by a group of Torres Strait Islanders led by Eddie Koiki Mabo. The court establishes that native title exists for all Indigenous Australians. The doctrine of terra nullius, meaning “nobody’s land,” is overturned.

The service of 51 Yolŋu men in the Northern Territory Special Reconnaissance Unit of the Australian Army is formally acknowledged by the federal government through payment and service medals. Only two of the men are still alive to receive their overdue recognition.

Banduk Marika becomes a member of the Australia Council for the Arts and the chairperson of its Aboriginal Visual Arts Committee.

Mändawuy Yunupiŋu is named Australian of the Year.

50,000 Years of Hunters and Spirits opens at the National Museum of Ethnology, Osaka, Japan. Larrtjanŋa Ganambarr, Dhuwarriny Yunupiŋu, Naminapu Maymuru-White and Steve Fox travel to Osaka to attend the exhibition opening and for an artist residency.

Parliament passes the Native Title Act following the High Court’s decision in Mabo v. Queensland. It recognizes the rights of Aboriginal and Torres Strait Islander people on both land and water in accordance with their traditional laws and customs.

Dianne and Andrew Blake begin working as art center coordinators at Buku-Larrŋgay (1993–2000). After a second tenure (2006–10), they regularly return to assist with special projects for more than a decade.

Aratjara: Art of the First Australians, the first major Indigenous-curated exhibition to tour internationally, opens at the Kunstsammlung NRW, Düsseldorf, before traveling to the Hayward Gallery, London, and the Louisiana Museum of Modern Art, Humlebaek, Denmark.

The National Gallery of Victoria, Melbourne, acquires an important collection of 25 large bark paintings that were commissioned from Yolŋu artists, both men and women, at Buku-Larrŋgay.

Will Stubbs starts working at Buku-Larrŋgay alongside Andrew Blake.

Miny’tji Buku–Larrŋgay: Paintings from the East opens at the National Gallery of Victoria, Melbourne.

The Wik people are successful in a High Court case that establishes the coexistence of native title and pastoral leases.

Between 1996 and 1997, John W. Kluge commissions 29 monumental bark paintings from Yirrkala and one ḻarrakitj (memorial pole) under the direction of Howard Morphy.

Djambawa Marawili initiates the Saltwater project in which 47 Yolŋu artists from 15 clans and 18 homeland communities document Yolŋu ownership of Sea Country. The resulting exhibition is a catalyst for the Blue Mud Bay case and serves as a crucial body of evidence.

John W. Kluge donates his collection of Aboriginal Australian art to the University of Virginia, Charlottesville.

The first national Sorry Day is held to remember the Stolen Generations of Aboriginal children forcibly removed from their families by official government policy.

The Croker Island Seas case determines that native title exists over 2,000 square kilometers of sea and seabed adjoining Croker Island in the Northern Territory. This marks the first time that an Australian court accepts native title claims to an offshore region.

Djambawa Marawili is appointed chairperson of the Association of Northern, Kimberley and Arnhem Aboriginal Artists.

The first Garma Festival of Traditional Cultures is held at Gulkula, a significant Gumatj ceremonial site near Yirrkala.

The Kluge-Ruhe Aboriginal Art Collection opens at the University of Virginia, Charlottesville.