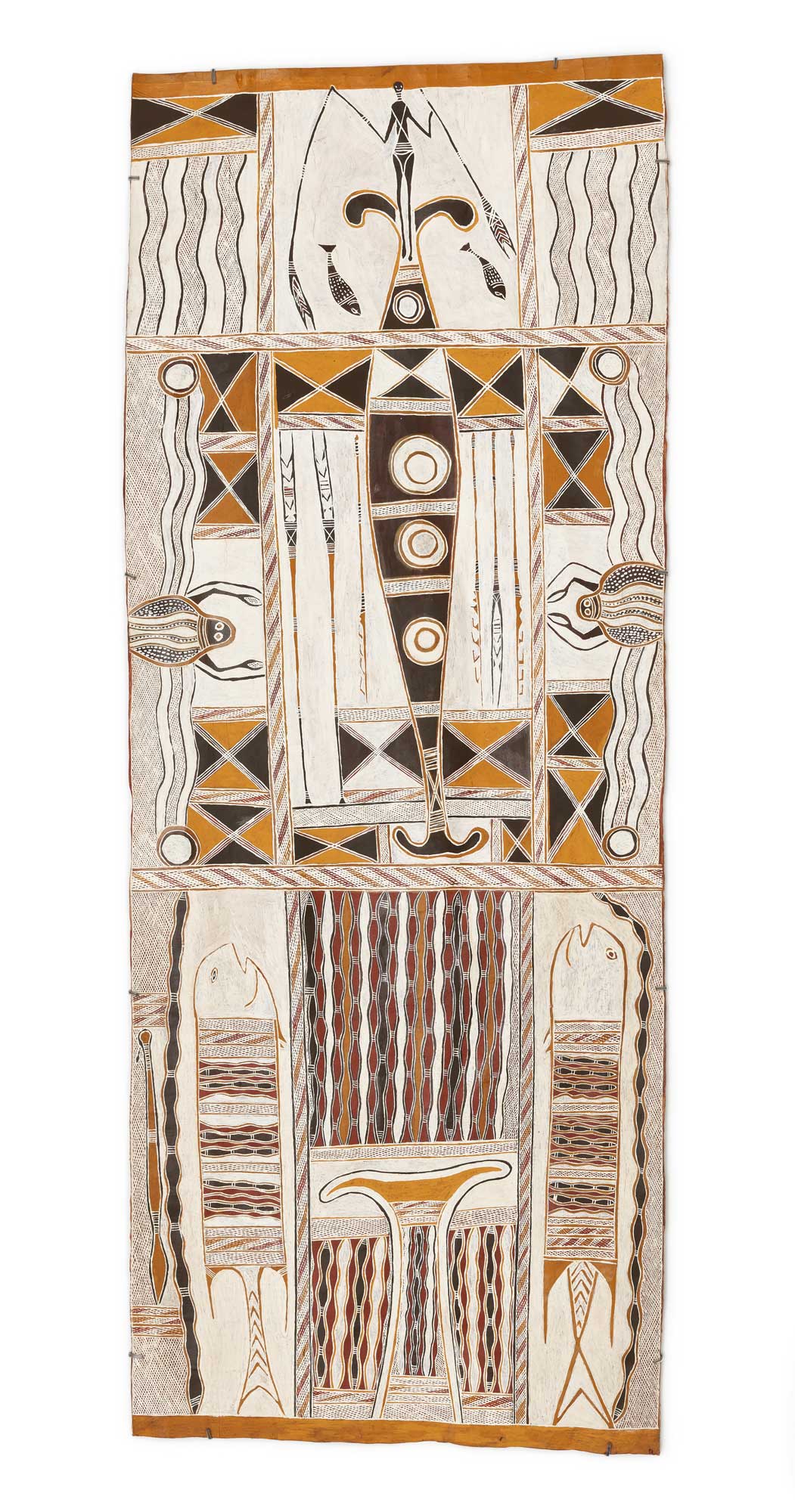 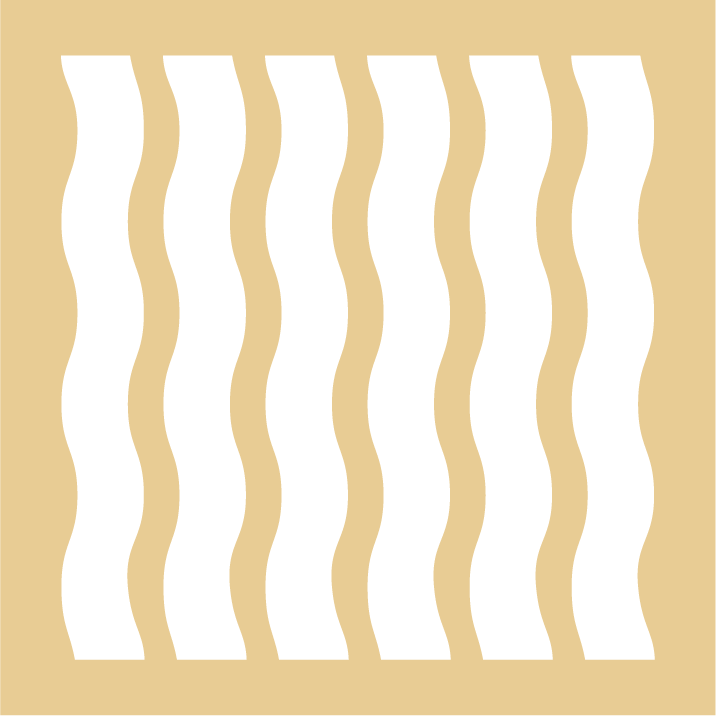 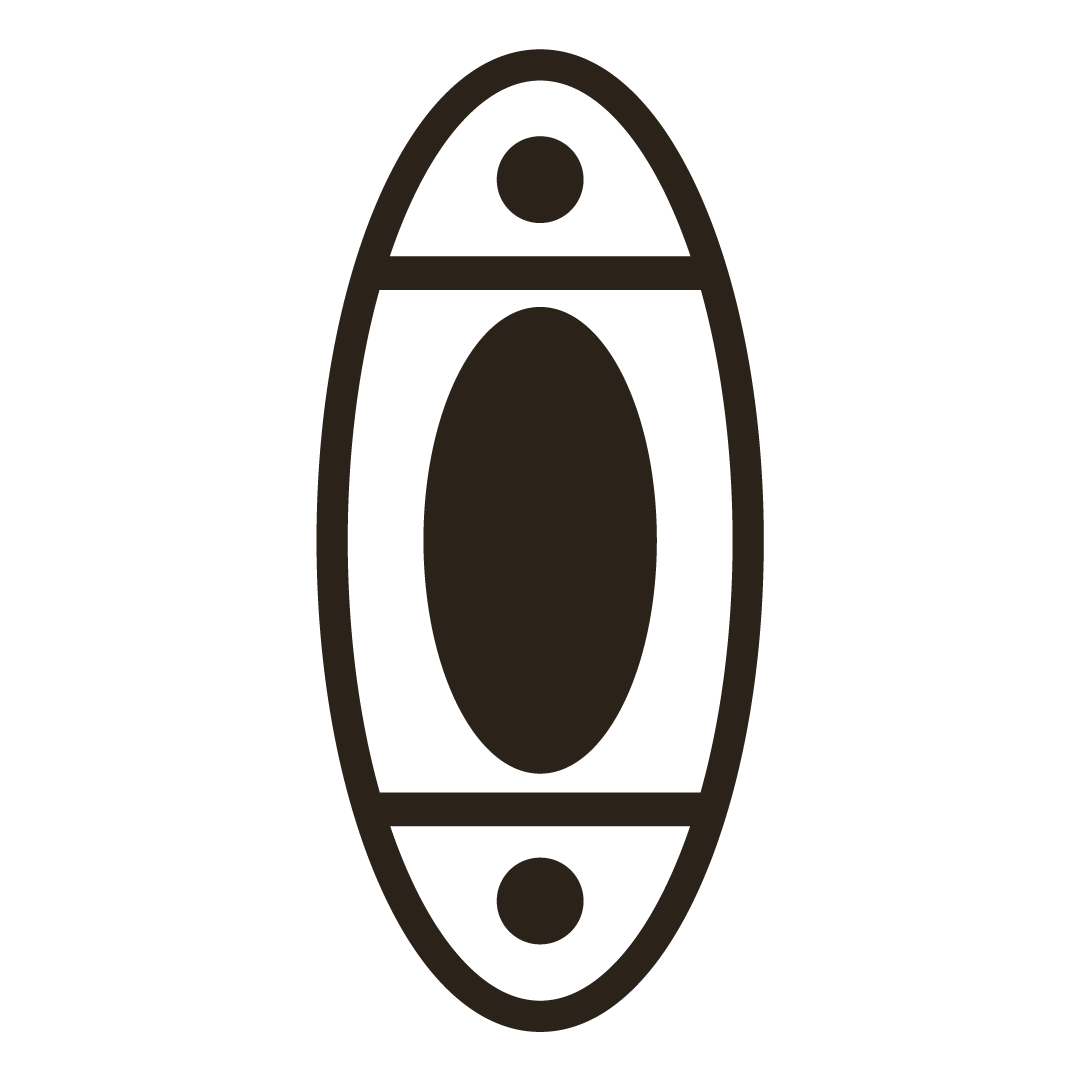 "Baluka’s most recent painting, Makmanya | The Other Djarrakpi, like Narritjin’s Djomula Raŋga | The Marawili Tree Raŋga, represents two clan estates. The lower panel is another painting of Wayawupuy but oriented toward the sea to the area in the bay where the Ŋuykal emerges. The background pattern again refers to yoku and to the freshwater flowing toward the sea. The image of the spear thrower in the left panel alludes to Ŋuykal’s relationship with the ancestral Ŋulumun: the hunted and the hunter. The anvil-shaped figure references the fish’s tail, poised to propel it through the water, an analogue for the hunter’s spear and spear thrower. At the same time, it alludes to the Dhukururru, the ancestral rock that makes its appearance in the saltwater. Ancestral beings are both the foundation of place and the medium of connection between places. Just as Waŋarr move, so, too, do people and spirits."

The top half of Baluka’s painting Makmanya | The Other Djarrakpi refers not to the Maŋgalili place on Cape Shield but to the site of the yiŋapuŋapu on Groote Eylandt. Djarrakpi, or Djarrakpa in the Wanindilyakwa language of Groote Eylandt, is the place the Nyapililŋu originally set out from when they journeyed to the mainland. The painting covers similar themes: the fisherman, the ghost crab, the sand crab, the sand sculpture. The Guwak and Nyapililŋu are present in the geometric elements of the painting: the Marawili tree of the Guwak rises from the top and bottom of the yiŋapuŋapu; and the cross-square design represents breast girdles of the Nyapililŋu. In this delicate and elegant painting, the images seem to be dancing off the surface of the bark.

The Maŋgalili are a Yirritja moiety clan. Their saltwater homeland is at Djarrakpi on the...

“My father did not want to go and stay in that particular area; he wanted... 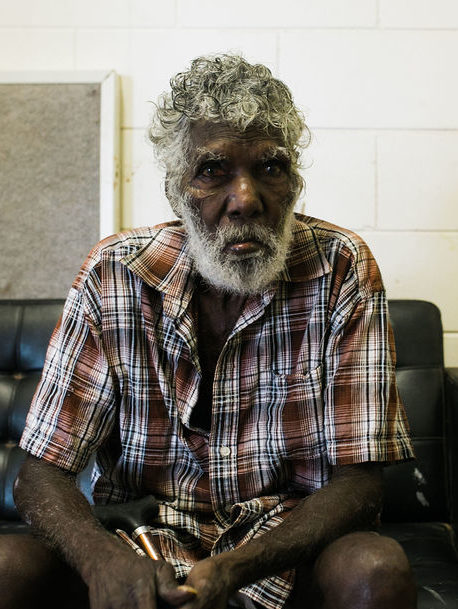 Baluka Maymuru is the son of Nänyin’ Maymuru. A respected elder and ceremonial leader, Baluka is the head of the Maŋgalili clan. From 2000-2003 he was the chairman of Buku-Larrŋgay Mulka. He is one of the few artists to have produced works for the 1996 John W. Kluge commission as well as the 2017-19 Kluge-Ruhe Madayin commission. He is the two time winner of the Wandjuk Marika 3D Memorial Award at the National Aboriginal and Torres Strait Islander Art Awards in 1987 and 2006.

Berndt Museum of Anthropology at the University of Western Australia

Museum and Art Gallery of the Northern Territory