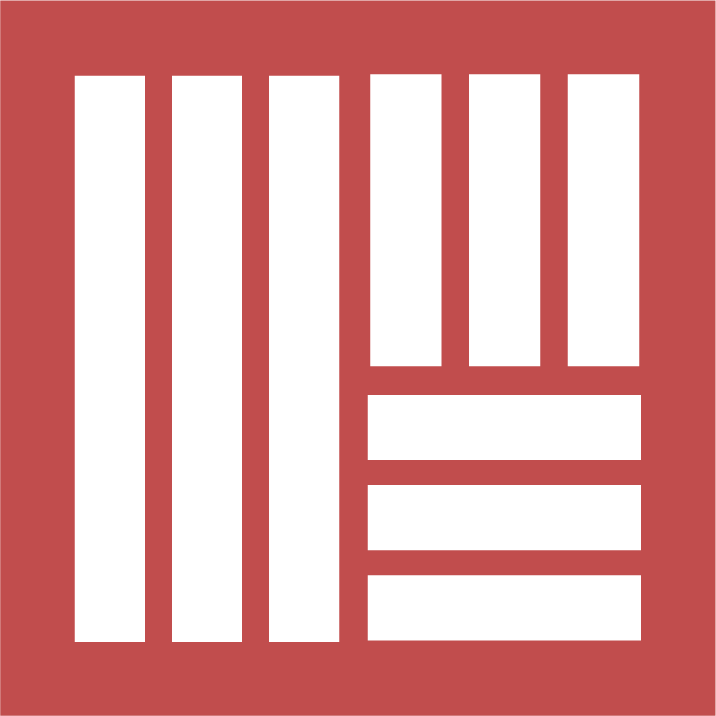 "This one is Rulyapa. Rulyapa is the current between here and Gutjangan [Bremer Island]. Dhaŋum baṉḏa. A current runs between Gäluru and Bremer and runs out into the ocean. And this one, it’s a rock, over at Gäluru. In between, the water runs across the bay from Galupa, through in between Gäluru and out into the ocean here, and also it runs between Wirrwa and Dhambaliya. The water runs out and in between those causeways. Murruruma is that rock, and that water is Rulyapa. This is for Gäluru, Wirrwa, in between Wirrwa and Gäluru. It goes in between. And that water flows out to sea between East Woody, the rock, the island; it goes out to the Pacific Ocean. Over there is the current going out to Melville Bay, across in front of Gäluru. You know the patches [of rough water near] where Gäluru is, around there, it goes between the island and Gäluru. It’s going out to Melville Bay and out into the ocean.

This pattern is from Gäluru. Just think of that place Gäluru, what it looks like, toward Ruwakbuy (beach on Bremer Island) toward the sand dunes. And Ruwakbuy is joined together at Mirrikiwuy, where that pair of rocks join together, and those two currents are joined together. It’s blowing up into the ocean, then it comes back. Yo. Gäluru and Maṉhala and Ruwakpuy.

Murrurruma is a man, a Rirratjiŋu man, and for a long time he made trouble over a Yirritja woman, asking her to elope with him. Yes! Wangurri women. And he, Murrurruma, was Rirratjiŋu. The woman asked, “Where are we going?” But Murrurruma took her and her sister without the permission of her family. He took them over to the other side of Yuḏuyuḏu, and from there, they came across to Yirrkala.

All the sisters' brothers and uncles and others, they found out the sisters were gone, and that Murrurruma had taken them away. Yes, he stole them. Didn’t say anything. And so, the women’s family came toward Yirrkala and landed at Melville Bay, they came across. All the close kin, sisters and brothers, they came by dugout canoe and landed at Galupa. They tracked him until they found him at Mirriki, where those two rocks are, close to Yambirrpa. He had made a fire for fish. They had fish, the two women, and him, Murrurruma. And all those people landed there, they came by dugout canoe. And they found him there, Murrurruma. They came around this side and the other side and they found him and they speared him and he died, and all the women, his women cried. Yes, all his mothers cried for him, then his spirit went away, it went out. He walked, a human being. He’s a man out in the ocean; he turned into one. He was singing, and then he turned into a rock. Maybe you know the rocks over at the middle of the sea?

Yes, that’s him. He turned into that rock, where his spirit went. And he came back for all his family and he told them, “I won’t be here anymore. You will see me, my spirit, as a rock out in the ocean.” Yo, Murrurruma is my father’s miny’tji. "

Rulyapa, the rough saltwater country between Nhulunbuy and the large island of Dhambaliya, balloons up from the secret depths, around the sacred rock Maṉhala, which exposes itself at the low tide, above the raŋ (tide marks), bleached white, with a patina of brine and weather. Maṉhala is one of many names given to the rock. Djambarrpuyŋu and Rirratjiŋu clans have many deep names that are intoned by the ritual specialists at the culmination of related ceremonies. 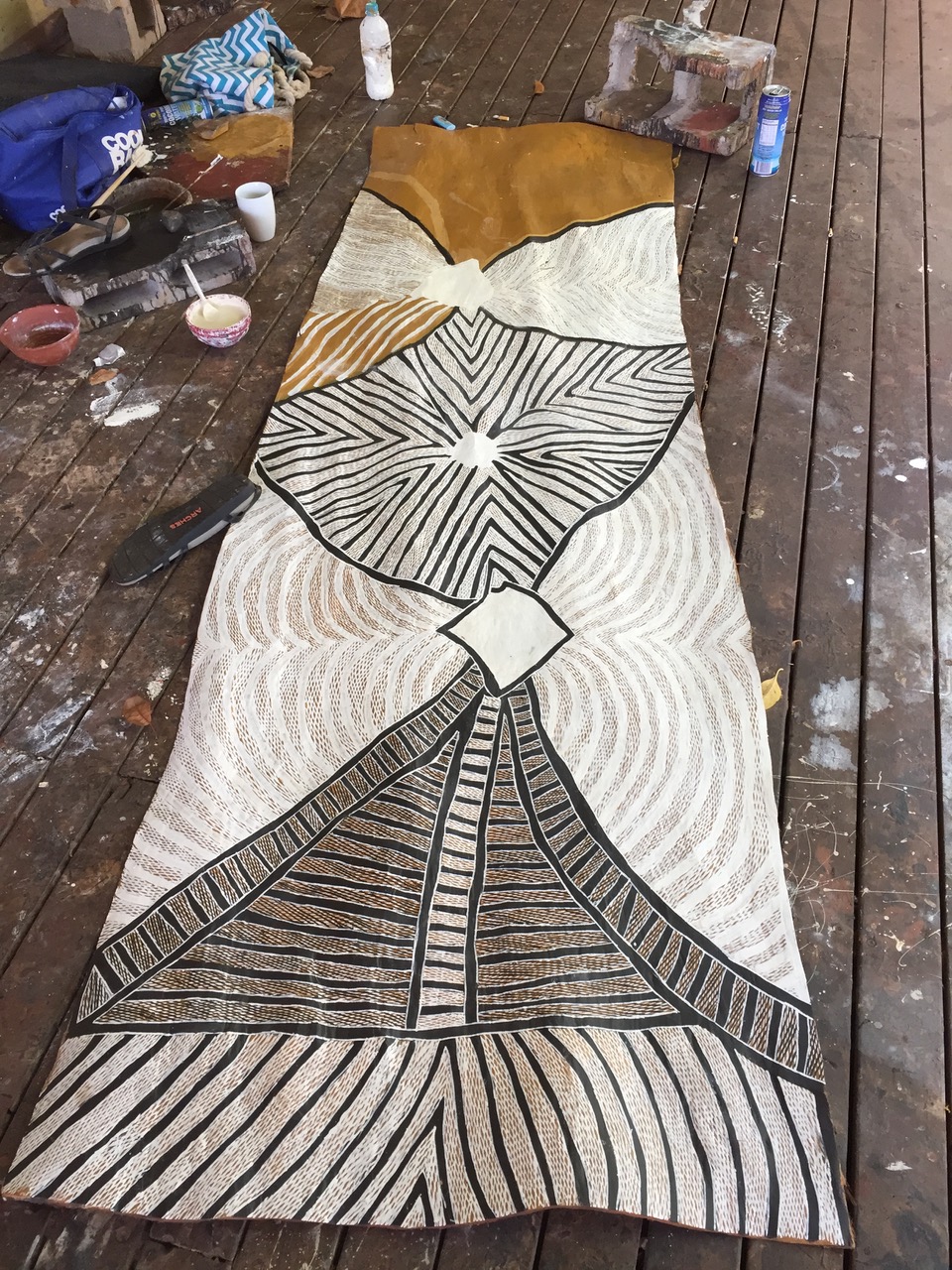 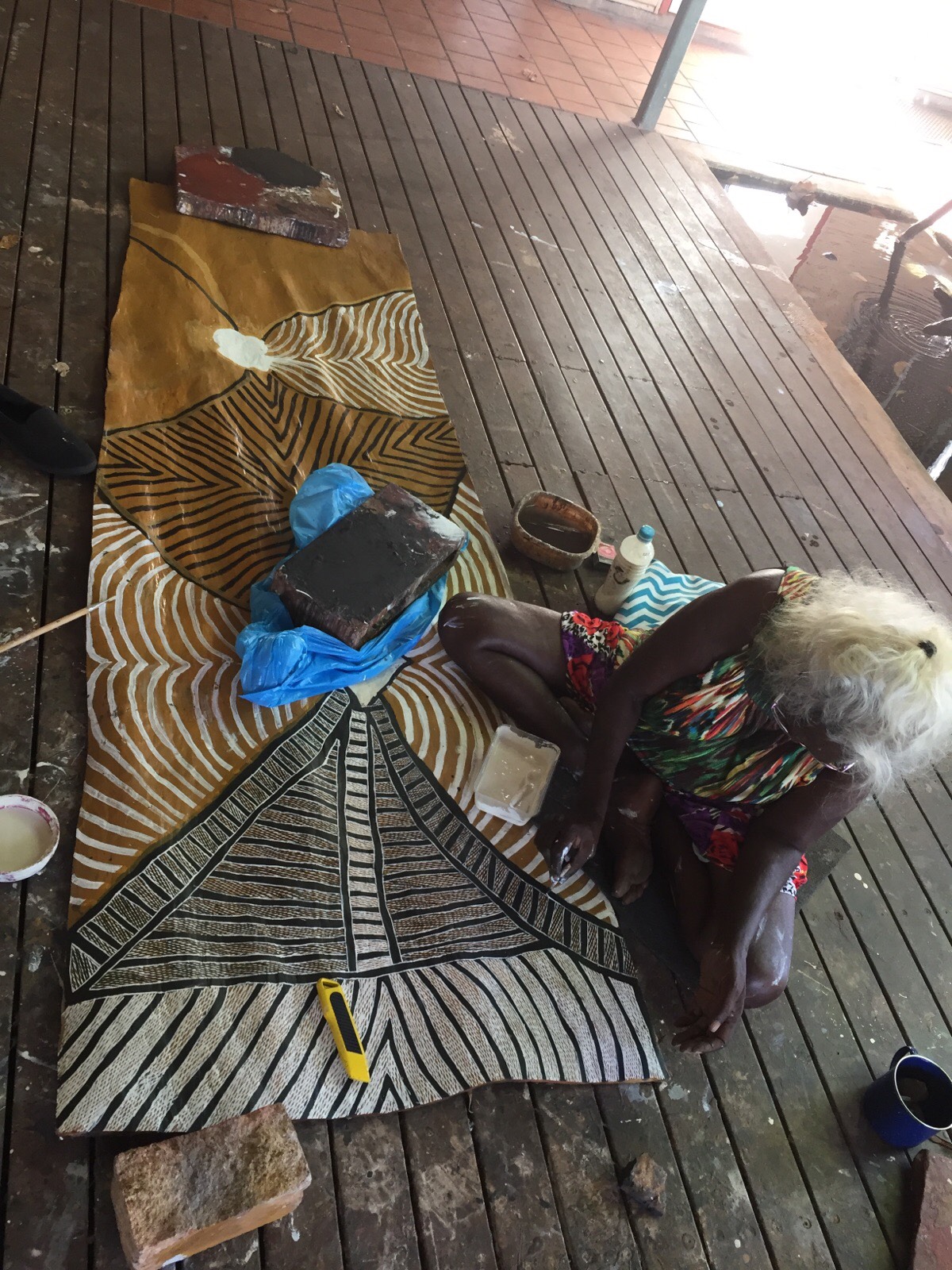 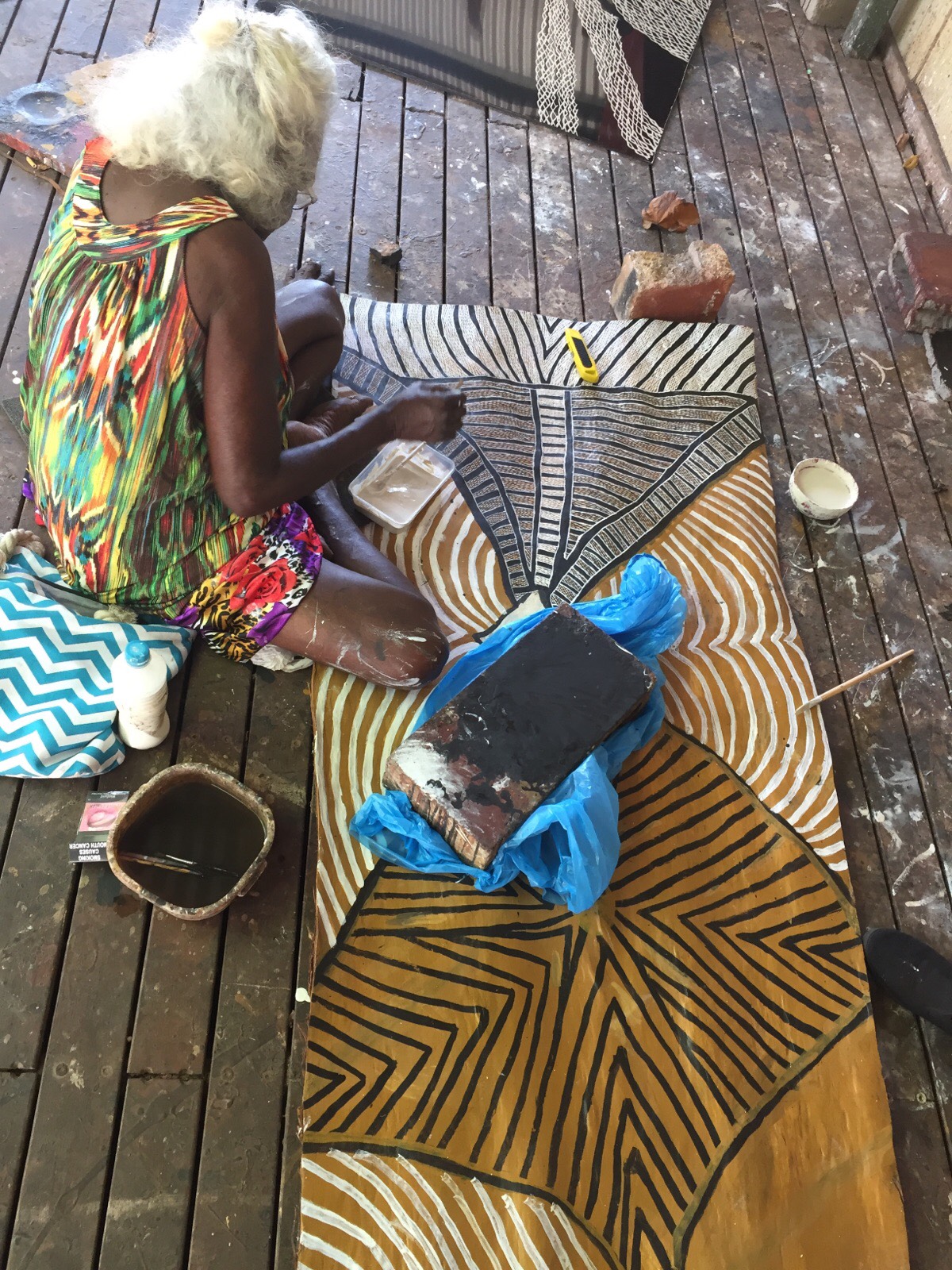 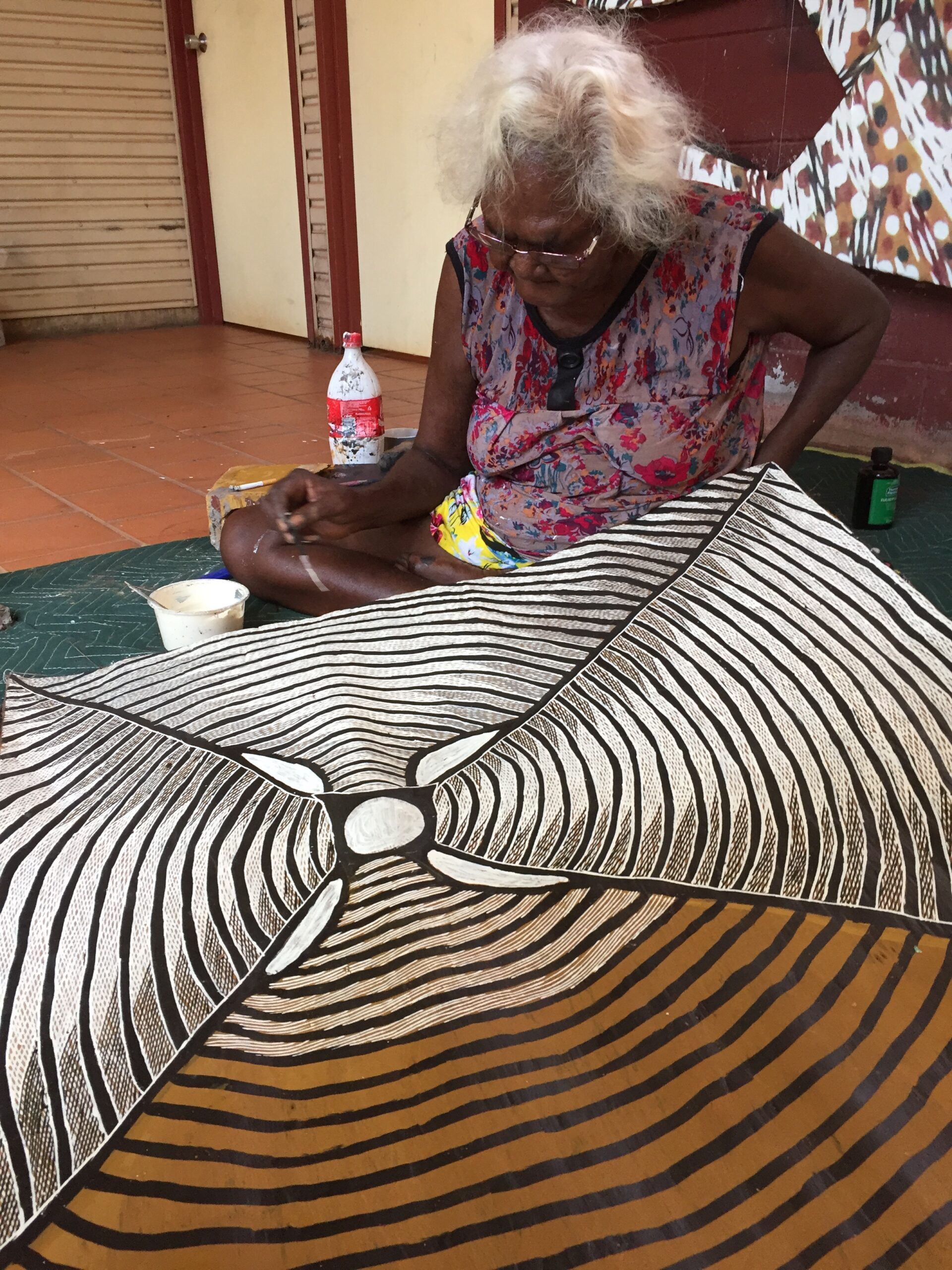 The Rirratjiŋu clan belongs to the Dhuwa moiety. The major spiritual themes relate to Yalaŋbara,... 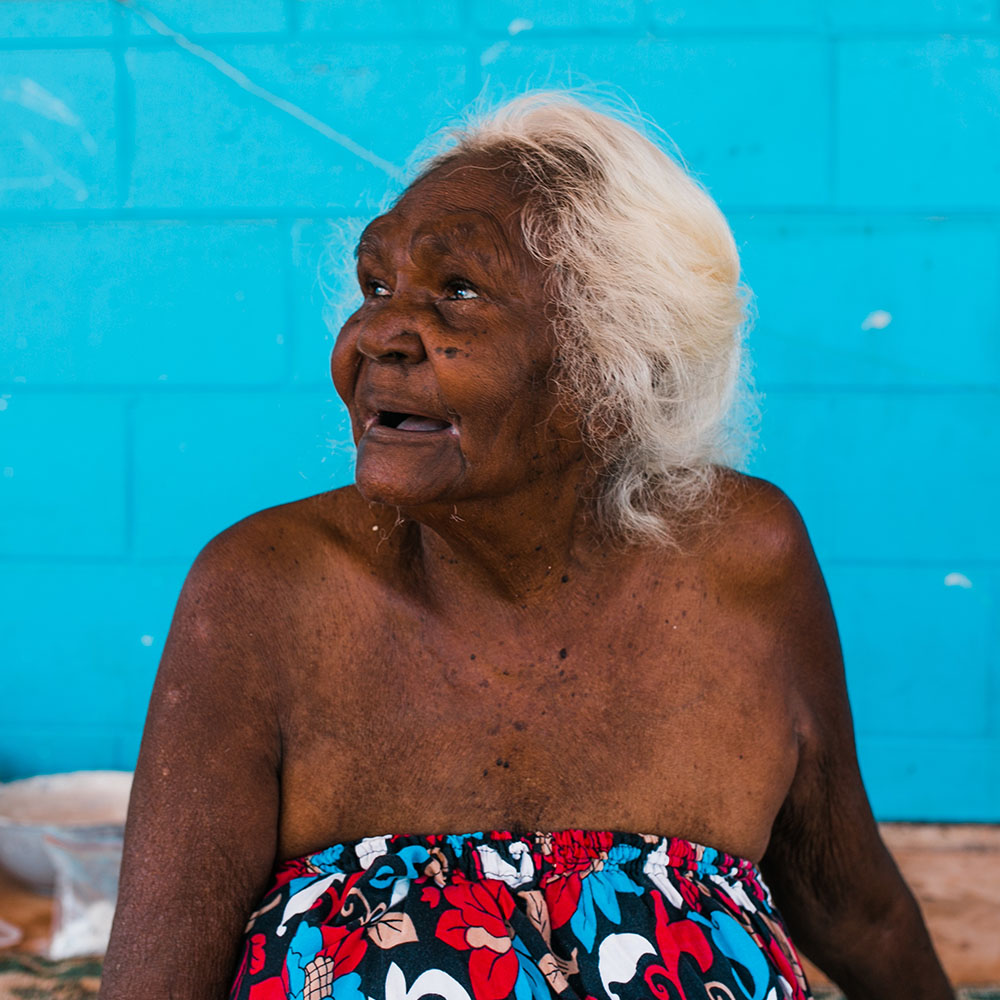 Dhuwarrwarr Marika was the first woman authorized to paint maḏayin miny’tji (sacred clan designs). The daughter of Mawalan Marika, she received permission to paint the sacred designs associated with the Djan’kawu Sisters while working as a nurse at the Yirrkala mission hospital in the late 1960s. Her example would open the door for future generations of women artists who continue the practice at Yirrkala. An important stateswoman and leader, she has represented her community on numerous councils and committees across Australia.