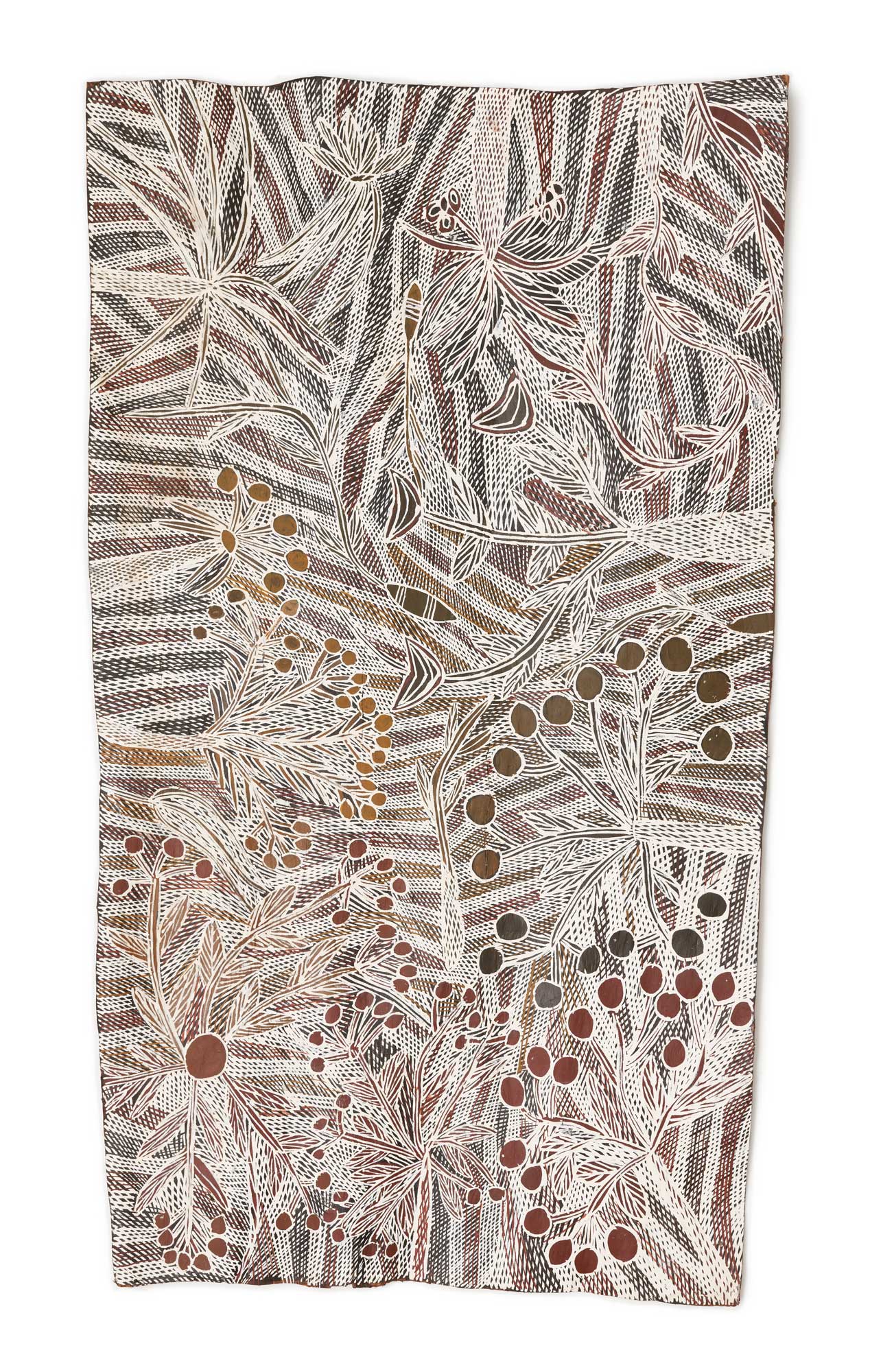 In 2009, Mulkuṉ Wirrpanda teamed with the artist John Wolseley to document all the edible plant species in northeast Arnhem Land. Mulkuṉ was driven by a desire to pass her encyclopedic knowledge on to a younger generation whose health has been adversely impacted by the introduction of processed foods. Mulkuṉ and Wolseley’s project culminated in the major touring exhibition Midawarr | Harvest organized by the National Museum of Australia in 2017–19.

In Retja I & II, Mulkuṉ summarizes her larger project, depicting over thirty different food plants. These include:

Buḻwutja (Cycnogeton dubium, previously Triglochin dubium, water yam)
Bulwutja is an aquatic herb with small root tubers which grows in clumps in billabongs and swamps. After cooking it, it is mashed into a grey paste that can be baked into a bread. The water yam is widespread and common in the Northern Territory.

Riny'tjaŋu (Eriosema chinense, red skin yam)
This food is only a Wet Season food. It grows in the open woodland. It is a sacred plant for Gälpu clan people - the Rainbow family. Rainbow colours are etched in the skin of the Riny'tjaŋu. Wititj is the Rainbow Serpent and its arced coils refract the sun prismatically. These sacred colors are visible once you have dug Riny'tjaŋu from the ground and placed it in your dillybag. Because when you are digging it up it gets bruised. The skin is like paper and it comes off easily. While it’s being touched and dug, it changes colour, then you can see the white, a bit of blue, yellow, the red, especially the red, pink, and orange on the skin of the yam.

Buṉdjuŋu (Capparis umbonata, bush orange)
Buṉdjuŋu is a very healthy, segmented fruit. The fruit has a green skin and is yellow inside. It is best picked and then left for a few days before eating. If you cut it open and rub the fruit with muruŋgun (red ochre) and leave it for three or foud days, it helps the fruit to soften and ripen. The plant is depicted in paintings in many different forms to preserve sacred designs and showcase the different elements of the fruit and leaves.

Yukuwa (Vigna vexillata stringy yam)
Yukuwa is a sacred plant which unifies Yirritja people and relates to sacred objects, songs, and dances. Yukuwa’s annual reappearance is a metaphor for the increase and renewal of the people and their land. Traditionally, the invitation to such a ceremony is presented in the form of a yam with strings emanating from it with feathered flowers at the end, which suggests kinship lines and ties.

Gurrumu (Meiogyne cylindrocarpa, previously Polyaulax cylindrocarpa, fingersop)
This is one of the fruits whose story is told in the Dhuwa song cycles that capture the actions of the Dhanbul spirits who harvest the Midawarr fruits. Gurrumu are yellow, orange, and red and are often found in the coastal inland areas of northern Australia.

Ḏilminyin (Ganophyllum falcatum, scaly ash)
Ḏilminyin is easy to spot in the rainforest where it grows because when it’s ripe it is a bright scarlet red in contrast to its glossy green leaves. If you haven’t had it before or for a long while or if you eat too many or if you are allergic, you may get a swollen or numb mouth, a rash or a cough after eating them. This is an Yirritja plant which appears in the songs of the North Wind Ḻuŋgurrma sung by Gumatj and Warramiri similar to Wäwuru.

Dhuŋuruk (Curculigo ensifolia, grass yam)
This grass-like food is cooked in ashes on a fire, which burns away the small hairy fibers and leaves. The bunches are pulled up and then pounded by a clapstick to make them soft for eating.

Ḏilkurruŋu (Curculigo ensifolia, grass yam)
Ḏilkurruŋu is a grass yam just like Dhuŋuruk, but it is found at Gängan and is much bigger than a typical Dhuŋuruk. Ḏilkurruŋu has broad leaves and fat tubers that are dug up and roasted on coals, then peeled and eaten.

Gurrukawuk (speargrass)
Gurrukawuk is the long sweeping grass with brown seed stems. It is a thinner version of the main variety of speargrass known as warrarri or gaḏitjirri. Young boys still collect large quivers of the stems of these grasses and have spear wars during this season.

Ganguri / Manmuŋa (Dioscorea transversa, long yam)
The ganguri is a tuber that is eaten raw or roasted, and is famous for being a food that many people still hunt for. Where the yams are harvested, we break the yam a few centimeters from the top where it connects to the vine and cover it over again with the soil. We will return a few years later and we will re-dig that plant from the same hole. This is known as niyarrŋ. Year after year we eat from the same plant as we remember our old harvest.

Larrani (Syzygium suborbiculare, red bush apple)
The larrani trees all grow intertwined. The fruits grow close to the ground so children can eat their fill. It is in the Yirritja songs of the season of the North wind when they are ripe (September-November). The leaves never fully flatten out and with the orange to dark red fruit on them they are easily spotted.

Gutjawutja (Miliusa brahei, raspberry-jam leaf)
Gutjawutja is a grape-like plant with black, shiny fruit that commonly grows in monsoon forests and coastal areas of northern Australia. When Yolŋu women collect these fruits, they wear the handles of their bags around their foreheads so they can keep both hands free to hold children or digging sticks.

Mawuka (Ipomoea graminea)
Mawuka is a climbing plant that only grows in open forests on Bremer Island. It has round, fat tubers that are eaten after cooking.

Gaṉay’ (Ipomoea graminea)
Gaṉay’ is another recognized type of perennial climbing plant, similar to Mawuka. However, it has more elongated tubers and can be eaten raw or cooked. Gaṉay’ is found on the mainland.

Wäwuru (Mimusops elengi, mimusops)
Wäwuru is a popular fruit which we often find behind the beaches in the sand dunes where the vine thicket and beach meet. It’s an environment suited for children and the clumps of trees and bushes group our favorite fruits together in little pockets across the landscape.

Ŋathu (Cycas orientis, cycad)
Ŋathu is one of the oldest food plants in the world. It is a sacred bread for the Yolŋu, especially the Wangurri and Gumatj. The but is collected, cracked open, dried out, and boiled to remove poison. The nuts are ground in accordance with sacred sites, songlines, and times to properly prepare them to be made into bread.

Djulukuṉ (Marsdenia viridiflora, bush banana)
Djulukuṉ grows as a vine in the open woodlands of many different habitats. The outside is green but the inside can be white, green, or yellow. When the plant is young, it’s eaten raw, and when the plant is older, it’s more likely to be cooked first in the coals of the fire until it becomes thinner and the inside can be scooped out and eaten.

Gäḻurra (Mallotus nesophilus, mallotus)
Gäḻurra fruits are yellow and brown, furry, and very sweet. Gäḻurra fruits are mentioned in the Dhuwa clan’s songs of spirits and of Rirratjiŋu, when the spirits excitedly find and harvest ripe fruits in the forest and can feed themselves.

Murrnyi’ / Murrtjumun (Grewia retusifolia, emu berry)
According to the Rirratjinŋu songs, the Murrnyi’ plant bushes belong to the buwata, or plains turkey, who eats the fruit. The plant is sweet and frequently eaten, but it is also helpful in medicine because it can extract the poison from a boil. Even in the modern day the Yirrkala Health Centre uses this preparation as its preferred drawing agent in favor of the commercially available Western alternatives like Magnoplasm.

Baḻkpaḻk (Sterculia quadrifida, native peanut)
There are six or more small black nuts inside a Baḻkpaḻk pod. There are two outer skins which protect the nut inside. Yolŋu people usually eat the whole nut, skin and all, so the first outer skin clings to the teeth or gums. If you scrape the branch to get to the white fibre inside and then scrape that fibre into a dish and add 3 or 4 spoons of hot water and wait for the water to become cloudy, the solution is often used as eye drops for tired or irritated eyes. The bark is also often used to make string for string bags.

Djiṉ’pu (Ficus superba, fig tree)
Djiṉ’pu is a large tree that occurs in coastal areas with purple and yellow fruits. When the fruits are ripe they become spotted, and they are very large and sweet.

Djilka (Drypetes deplanchei, drypetes)
Djilka is a small tree with red, ovular fruits. The tree grows mainly in coastal areas and monsoon vine forests, and its leaves are used to season and flavor savory cooking dishes, especially seafood. Leaves are placed on the food before and during the cooking process to sweeten the dish.

Gumbu (Flueggea virosa, white currant)
Gumbu is a small, round shrub that occurs predominantly in monsoon vine forests. It is characterized by white spherical fruits that are sweet when ripe. The fruiting of the Gumbu shrub signifies the end of the wet season and the beginning of the dry season. The straight and stringy stems of the plant are also used in the creation of small spears.

Munbi (Malaysia scandens, firevine)
Munbi is a climbing vine with white sap that is predominantly found in monsoon vine forests. Munbi provide small, round, red fruits that can be eaten raw or boiled in water. They have a nutty taste and are often collected in large quantities when they are ripe.

Ḏangapa (Persoonia falcata, milky plum)
The Ḏangapa plant is a small tree found in forests and woodlands. It has pale green fruits that are eaten when ripe and seeds that can be crushed and eaten.

Dhalpi (Livistona humilis, fan palm)
Dhalpi is a single stemmed plant that grows in open forests. It has a fan-leaved palm, the inner cabbage of which used to be eaten, but is not regularly eaten anymore. Emus, and occasionally children, will consume the purple fruits of the Dhalpi.

Gaḏayka (Eucalyptus tetrodonta, stringybark)
The Gaḏayka bark is peeled off large trees, flattened, and dried for traditional painting use. The sheets of bark can also be used as roofing material for shelters. The leaves of the plant are also helpful as a sore medicine when they are crushed, boiled, and rubbed onto the skin.

The Dhuḏi-Djapu’ clan belong to the Dhuwa moiety. Major spiritual themes include Mäṉa and the... 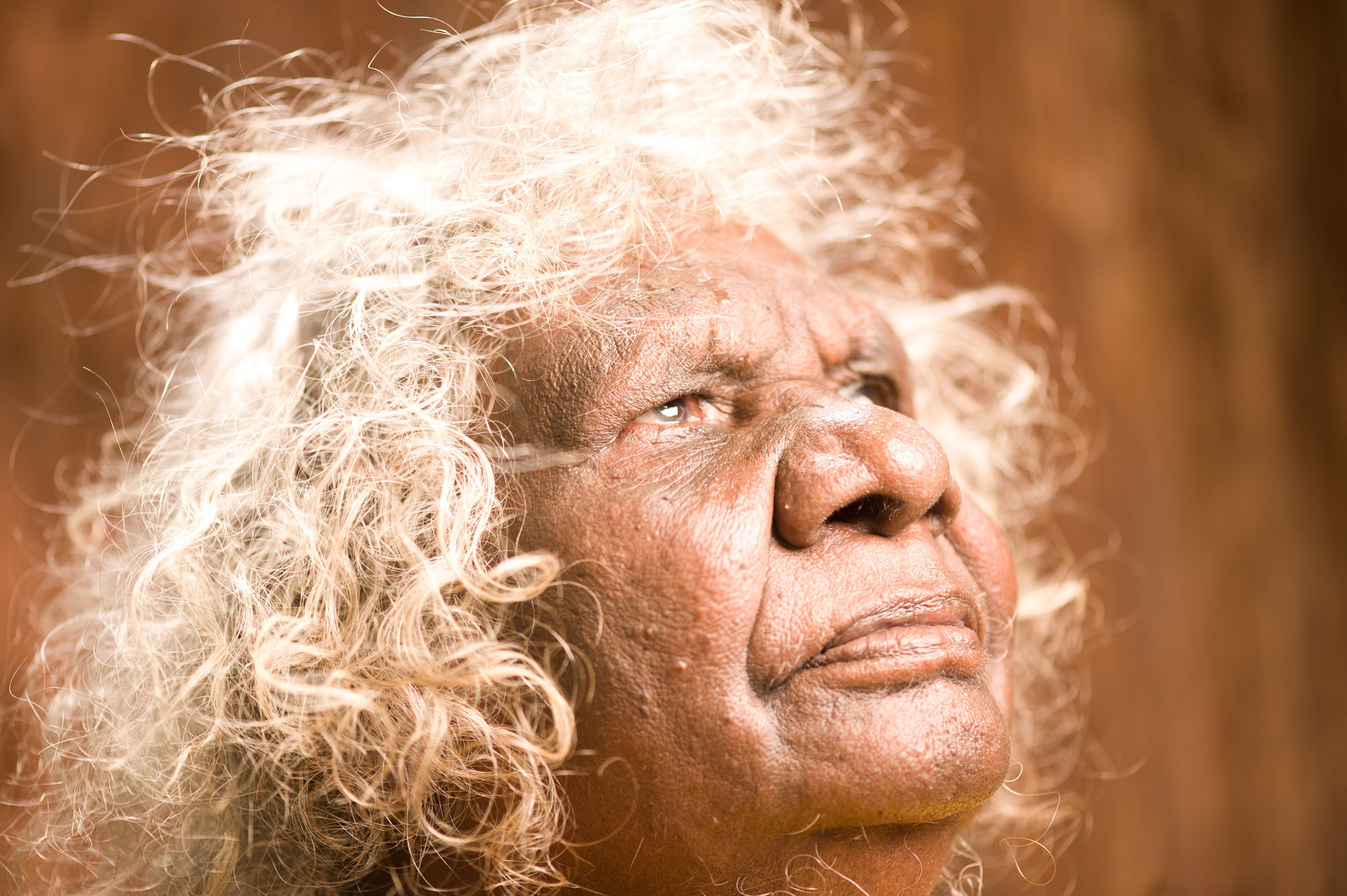 Mulkuṉ Wirrpanda was a respected elder of the Dhuḏi-Djapu’ clan and the wife of Wakuthi Marawili. In her early career, she generally painted maḏayin miny’tji (sacred clan designs) of the Dhuḏi-Djapu’ clan. In 2009, she teamed with the artist John Wolseley to document all the edible plant species in northeast Arnhem Land. Mulkuṉ and Wolseley’s project culminated in the major 2017–19 touring exhibition Miḏawarr | Harvest organized by the National Museum of Australia.